Are you thinking of getting your Labrador neutered? Neutering your Labrador has a lot of benefits. However, it too puts your dog at certain disadvantages requiring you to be more vigilant in your care. While neutering lowers the risk of testicular cancer in dogs, it may increase the risk of obesity in him. 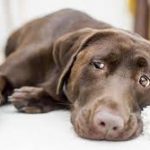 Neutering is medically known as orchiectomy. This procedure involves the surgical removal of the testicles of a male dog. It is also called sterilization, castration, or “fixing” a dog.

Benefits of Neutering Your Labrador

Generally, Labradors are not aggressive. However, there may be instances when your dog shows food, territorial, or sexual aggression. When recurring, such behavior becomes a regular feature and your friendly dog turns a threat to kids and strangers.

Neutering your Labrador makes him calm and passive. Sex hormone testosterone is an important factor for causing aggression in male dogs. The testicles produce most of this hormone while the adrenal glands secrete it in small quantities.

You are removing the main source of testosterone by neutering your dog. This suppresses the foremost cause of aggressive behavior in your Lab. The difference in aggression becomes visible from 2 weeks to 6 months after the procedure.

Again, the production of testosterone in your Labrador’s body urges him to compete with other male dogs and mark his territory. While neutering does not fully stop your Labrador from lifting his leg on your furniture, it deters him from territorial marking. As a result, such behavior becomes suppressed.

Humping is a display of dominance or sexual tension. This behavior is also caused by testosterone. By neutering your Labrador, you can stop him from humping and mounting on you, your visitors, and your other dogs.

Lowers Risk of Testicular Cancer and other Testosterone-Induced Diseases

All dogs are beautiful no matter what they look like. But we have the choice to reduce the chance of producing puppies with congenital diseases and abnormalities.

Breeders do not breed Labradors for the sake of money. Most of them are passionate about developing the breed and making sure the offspring they produce are purebred and free from genetic problems. Responsible breeders get the dogs under their care screened for potential hereditary health issues. This allows them to know which dogs are good for breeding and lessen the chance of producing dogs that may develop hip dysplasia, elbow dysplasia, progressive retinal atrophy, and similar genetic problems.

Neutering your Labrador helps reduce the chances of unplanned breeding.

Disadvantages of Neutering Your Labrador

Neutering your Labrador can slow down his metabolic rate and thus, can make him obese. Studies have shown that to maintain a healthy weight, neutered animals only need around 25% fewer calories compared to intact animals. This means that if you are thinking of neutering your Labrador, then you must adjust his diet as well.

Once you have your Labrador neutered, then he cannot breed anymore. This means that whatever desirable trait your Labrador has, he can no longer pass it. But if you do not really have plans to breed, then this is not a problem.

Veterinarians say male dogs can be neutered as early as they turn 6 to 9 months old. For big dogs, such as Labradors, veterinarians recommend waiting until the dog reaches 2 years of age or until he is fully grown. The reason behind this is hormones play a vital role in the development and growth of dogs’ bodies. Some veterinarians report joint problems in dogs neutered early. In fact, a study by researchers from the University of California claims that early neutering can cause health problems in German Shepherds. The same group of researchers is planning to conduct the same study on Labrador Retrievers.

While neutering your Labrador has its benefits, there is a downside to it too. It is best to weigh down the pros and cons of neutering before making the final decision.